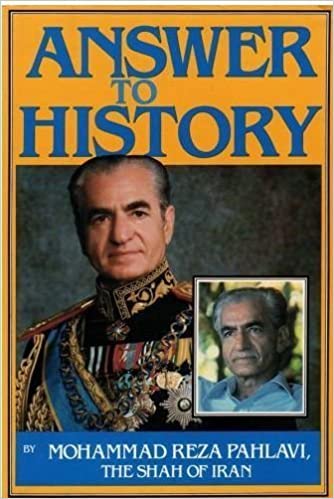 The final draft of Answer to History was completed by the Shah just days before he died on July 27, 1980. Completing it was, in the Shah’s words, “a race against time.” In it, he shows how the United States, once the most powerful country on earth, found itself hostage to the whims of Iran, a land few Americans knew much about. In telling his own story, the Shah shows clearly that Iran has become a battleground between the U.S. and the Soviet Union, which for over half a century has pursued goals with increasing success. In the “slide into chaos” precipitated by the Khomeini regime, the Shah saw the ultimate beneficiary being the U.S.S. R., which will reach the apogee of its strength no later than 1983, with the West facing “a decade of harrowing danger.” Answer to History begins with what really happened during the Shah’s period of exile in the Bahamas, Mexico, the U.S., Panama, and finally Egypt. It goes on to cover all of the momentous experiences of the Shah’s reign, a book full of heroes and villains, with many surprises for the American reader as to who the villains really were and are.

The Shah discloses backstage developments in today’s politics of oil. He reveals his relations with American presidents from Roosevelt to Carter; leaders such as Churchill, DeGaulle, and Tito; and strategists such as Henry Kissinger. He deals with SAVAK and CIA´s role in helping to train its agents, and with the double standards of the west, whose human rights advocates were critical of some of the practices of his regime, but are silent about the reign of terror that succeeded him. The Shah shows how the interplay between the Black and the Red – the 14th-century clergy and the Tudeh Party loyal to the Soviets – blocked for their own purposes his proudest achievements: the White Revolution in which the Shah introduced land reform, worked toward the liberation of women, and raised the standard of living of his people, providing disparate ethnic groups with pride in the 2,500 year-old culture of Persia. When the enemies of his reign took to the streets, the Shah felt that he reacted not too strongly, but not strongly enough. His chapters on “The Unholy Alliance of Red and Black” and “The Terror” are informative and alarming.

Mohammad Reza Pahlavi considered himself the staunchest allay of the United States in the Persian Gulf area. In his Answer to History he reveals the forces that betrayed him, and left the U.S. without an economically and militarily strong ally in a critical part of the world.