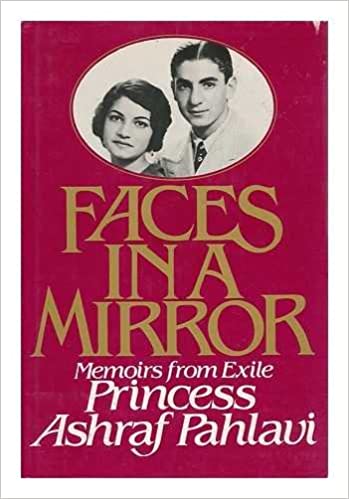 Faces in a Mirror: Memoirs from Exile

“No matter how I would reach out in the years to come – sometimes even desperately – to find an identity and purpose of my own, I would remain inextricably tied to my twin brother. I would marry more than once. I would have children of my own. I would work for my country in ways unheard of for a woman of my generation. I would even go into exile (three times) alone. But always the center of my existence was, and is, Mohammad Reza Pahlavi.”

Here, in what is bound to be one of the most controversial and talked about books of the decade, Ashraf Pahlavi, twin sister of the Shah of Iran, tells the extraordinary story of her life and of her country. For the first time she records her views — based on personal experiences and inside information as only she could know them — of the events which surrounded the removal of the Shah, the take-over by the Khomeini regime, and the international furor which resulted from her brother’s treatment at New York Hospital.

In FACES IN A MIRROR, she recalls her fiercely determined rise to independence and political activity in a country that traditionally has granted women few rights and little freedom- some even came to call her “the real power behind the throne.” Now she recounts the historic events she has witnessed and been part of for four decades since the time of the Teheran Conference in 1943:

* She discloses new details of her visit to Joseph Stalin at the height of the Cold War, when Iran was facing grave dangers from the Soviet Union.

* She talks for the first time about her intense personal struggle with Iran’s controversial Prime Minister Mohammad Mossadegh and reveals her secret role in “Operation Ajax” – the CIA operation that led to Mossadegh’s fall and kept Iran from the hands of the Communists.

* She offers a comprehensive account of the events that led to the overthrow of the Shah and makes clear how central was America’s role in bringing about the downfall of the monarchy.

* She tells what happened in the last year of the Pahlavi reign, how it happened, and who the men were behind the upheaval.

Ashraf Pahlavi speaks directly to the widely publicized accusations that have been made against the Pahlavis and against herself – charges ranging from police brutality and misappropriation of public funds to espionage, smuggling, and even drug traffic. “It is,” she writes, “in part such allegations that have led me to write this book – not as a way of defending myself, but as a way of considering these charges candidly and truthfully and as a way of setting out the political events in my country, as well as the events of my personal life.”

This is a courageous, frankly personal document by one of the most extraordinary women of our time – a woman who has participated in some of the most critical moments in our postwar history. She has shared the burdens of her brother as he was forced into exile and had to search the world for a new home, watched the raging controversy outside as her brother lay ill in New York Hospital, and, in December 1979, received the news that her son Shahriar had been shot and killed in a Paris street.

Whatever your views about Iran, the Pahlavis, or American policy in the Middle East, you cannot fail to be moved and enlightened by this gripping account of a woman caught in the vortex of history.